The great festival of Sassari

The magic of Candelieri, the great festival of Sassari

The great descent of the Candelieri has its roots in the medieval past of the city. A long history of devotion to the Assumption, economic sacrifices and physical fatigue.

The "Festha manna" or in other words the "great festival" of of Sassari is a procession of Candlesticks: a procession which is also a popular feast and rooted in its origins in the medieval past of the city: in the full thirteenth century Sassari was politically dependent from Pisa , which he gave the city a municipal law and by sending to administer the mayor. From Pisa came the religious rite to honor the Virgin of the Assumption every "mid-August" with an offer of wax, he went by the whole town population in the form of large candles 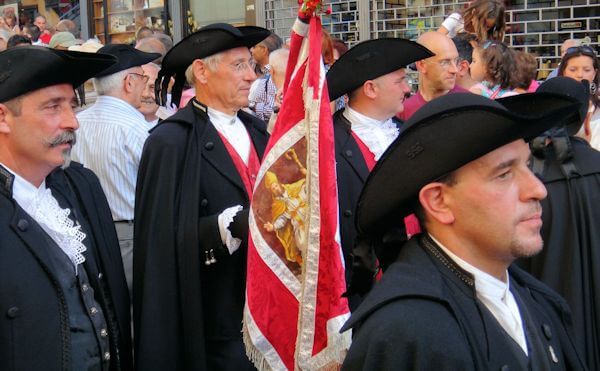 The beeswax was very important at the time, it was in fact a form of "energy source" (to use modern terms), allowing the lighting and thus also had a positive economic value: the annual cost of the offer was taken from civic community and the corporations of arts and crafts, in the name of the city population, they assumed the task of transporting this offer to the church where he had celebrated the Assumption.

The candles were carried by porters and placed above the sedans, probably originally composed by a simple square platform with poles to facilitate the distribution of the load (the large candles). These candles, which had to be high enough, were probably brought to the base sedan from media and maybe tie rods at the summit to ensure that transport movements lesionassero them. At these "structures of transport" they were added by the faithful various decorations.

From the Middle Ages the use of the offer in wax survived in Sassari and maintained despite the alternating dominations, until it was Spanish in the sixteenth century, when this procession took on new value, renovated in the spirit as a vow to the Virgin to stop the plague that afflicted Sassari and the Sardegna on several occasions, especially in the year 1652.

It was with the plagues of the sixteenth and seventeenth centuries who were born the current Candlesticks: the devotional offering to be real, ie, the big candles, became symbolic when the wax was replaced by wood and cylindrical drums became real columns, so much so that right in the Cinquecento in municipal documents mention the "columne incoronade", ie "columns crowned" for the evolution of decorative which involved the upper part, where they were placed religious images (painted or engraved) with flowers, paper decorations, ribbons (recent developments in turn the guys were holding the candles in antique straight on sedans).

The Candelieri thus formed are counted as "shoulder machines" and as such they are recognized and valued by UNESCO, along with other shoulder machines present in Italian cities and the rest of the world. While descending to the town street, the fact Candlesticks dance, they are moved by creating (within the limits of their weight) of dance figures and that is where the religious sentiment transcends the popular festival, joyous moment in memory to past generations of Sassaresi, escaped the plague.

It is true that in some years both recent and distant past has transcended mistakenly excess (there are complaints even in the eighteenth and nineteenth centuries by governors and prefects), and this should be avoided for the respect of all and meaning religious.

But it is true that the joy of living is basically the engine that led those who survived those terrible epidemics to shoulder the burden of preparing the big party besides the weight of these wooden columns and celebrate by thanking the Assumption in order to rebuild it everyday life and move forward, working, putting on the family, generating sons and hoping in the arrival of grandchildren, making friends: in short, still give meaning to life, which is perhaps the meaning of life.

The great festival of Sassari