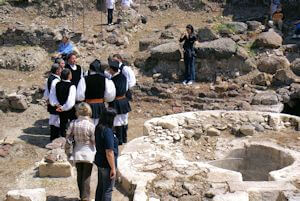 The territory of Perfugas is characterized by a landscape of wide fluvial valleys, separated from low reliefs with flat tops rich of ancient presences of man.

The town is 92 perfugas1m above sea level. Its ancient nucleus is on the knoll of Saint Maria, where the Nuragic-Roman and medieval centre developed. Studying a collection of thousands of instruments and artefacts has allowed dating Sardinian prehistory (which was previously believed to be around the VI millennium B.C.) to circa150-200.000 B.C.

Monuments include the complex at Domus de Janas of Niedda, the Aries Domus in Funtana Pulida and the spectacular Well Temple in the centre of town. 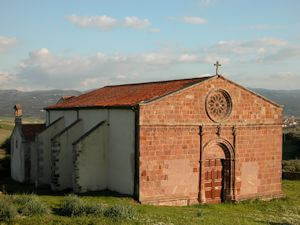 During the twelfth century it was built the first plant of the Romanesque church of Santa Maria, in the town center, the oldest example of employment in Sardinia of alternate rows of limestone blocks and trachyte. The church of St. George, in fine lines gothic Aragonese, which is located a few kilometers from the village, dates back to the period between the fifteenth and sixteenth centuries.

In addition to this rich heritage of architectural and archaeological heritage, Perfugas has an economy based on the integration of agriculture and livestock. It would be worth noting the high quality of perfughese cheese and its wide choice ....

The folklore is one of the great assets of the country. The chorus "Matteo Peru" which boasts nearly thirty years, has been organizing for years every summer an international festival of folklore and causes that Perfugas has become a popular destination for lovers of folk traditions. Not surprisingly, the "Matteo Peru", is part of Fitp, the Federation of folk traditions long been recognized by the Ministry of Entertainment.