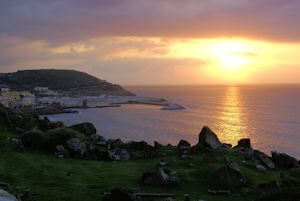 Our holiday apartments and holiday homes are located 8 km from Castelsardo, a small seaside town located in the Gulf of Asinara. Castelsardo has an intriguing century of history to tell. Founded in the twelfth century, it offers visitors fascinating surprises in its historic monuments, works of art, arts and crafts work.

The town of Castelsardo (was called before Castelgenovese, then Castelaragonese - under the Spaniards - and finally Castelsardo), the main town of Anglona, is renowned for the appearance of its historical center, nestled in a picturesque location on a steep promontory overlooking Asinara sea, and dominated by the remains of the walls and the castle built by the Genoese Doria

To observe the architecture of the old town, near the castle of the Doria and the Church, which was built overlooking the sea in every piece of land available. The unique narrow streets, closed to traffic, allow you to see the beauty of the place while walking freely.

To visit, in the alleys of the old medieval quarter, the cathedral of St. Anthony Abbot, identifiable for the bell tower in Aragonese style, and the church Santa Maria.

Are also a must the characteristic crafts shop: especially the magnificent baskets. The basket of Castelsardo is one of the Sardinian handicrafts, most appreciated for its value, it is most common in the world. The inhabitants of Castelsardo learned this ancient art of weaving, which still makes a beautiful setting in the streets of the historic center, the Antonian monks who came from Egypt between the seventh and eighth centuries. Of these monks Castelsardo preserves the memory in the oral tradition, living mainly in the "Perantunadda", a song in honor of St. Anthony Abbot. The art of weaving, probably arises from the need to use you local plant material to build containers or shelters or whatever the time of the human mind could imagine and create. 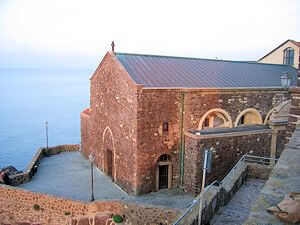 Date with the most genuine and ancient tradition of Sardinian folklore is the Monday before Easter, the procession of Lunissanti. The ceremony takes place in the evening, in the narrow streets of the old town, lighted only by old oil lamps. After the mass (in the church of Santa Maria), celebrated on the altar of the aurora Cristu Nieddu (Black Christ) starts a pilgrimage of "Cori" (groups of four singers) and "Mysteries" to the Basilica of Our Lady Rose of Jericho Tergu, where the Mysteries with the celebration of the Pontifical Mass, are presented to the madonna, accompanied dall'Attitu (crying Canto on Christ killed).

A short hike to the inland to the church of Santa Maria di Tergu, in Romanic style, the Paddagiu nuraghe and the Elephant. The Elephant rock - a reddish trachytic rock - was used by prenuragici to dig some graves.